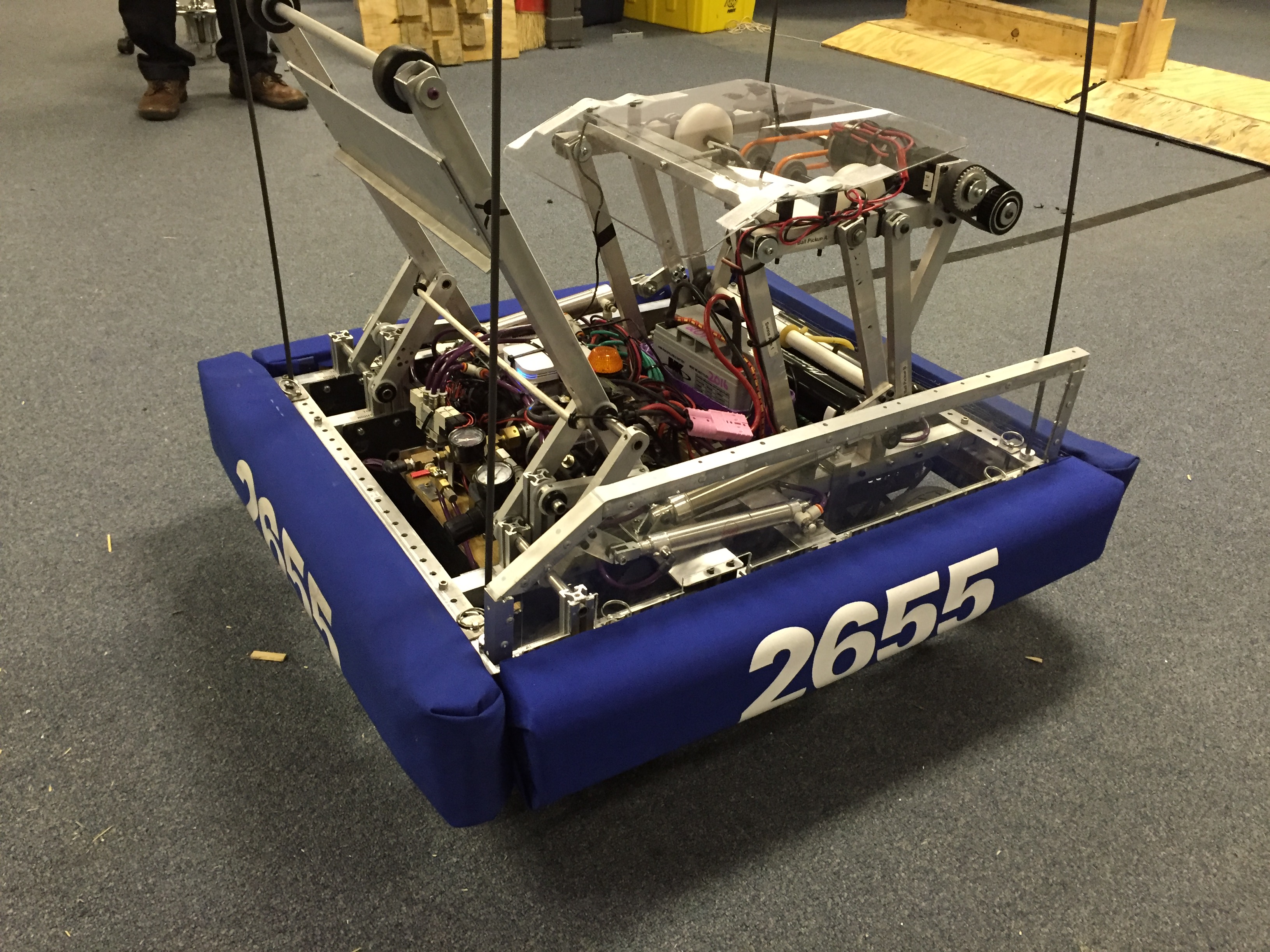 This is the documentation for the 2016 competition robot built by FIRST Robotics Competition Team #2655, The Flying Platypi. The code is built in LabVIEW and contains many features including:

Feel free to clone/fork the project and take a look around! Every effort has been made to keep the code as modular as possible. If you have any questions, open a request! IMU code was integrated from the official ADIS16448 RoboRIO Driver repository.

For creating Autonomous routines we made a system to make it easy enough for anyone to create a routine. To do this, we made an Autonomous Scripting program in Java. The Autonomous Scripting program write a routine to a text file by pressing buttons. This script can be read in the Dashboard code using the Array Parser.vi and the CSV Parsing.vi. CSV Parsing is used to read all of the information from the .csv file and the Array Parser is used to convert this information to an array that can be used as a routine. This array is then sent to the robot using the Array to Autonomous Commands.vi. Here they are sent to the robot and used to select the functions to run.

For each function of the robot there is a function that is selected in the code using the case structure. Each of these cases has an input, known as the argument, that is used wherever it is needed within the case.

This function is used to make the robot wait a specified number of seconds which is determined by the argument.

This case stops all of the drive motors, the ball intake motor, and retracts both the Defense Destroyer and the ball intake. There is no argument required for this function. This is only used at the end of a routine.

This executes the 16448 reset function within the IMU code. This has no argument and should always be used at the beginning of each Autonomous routine.

This case uses a PID loop to tune rotation of the robot. It will run until the Z angle of the IMU is within half a degree of the argument.

This case is used to drive forward at full speed until it reaches the length specified by the argument, which should be measured in degrees. It has a PID loop on the rotation so it should drive in a straight line.

This case is used to drive forward at 70%l speed until it reaches the length specified by the argument, which should be measured in degrees. It has a PID loop on the rotation so it should drive in a straight line.

This sets the boulder motor to release the boulder. No argument required.This function does not run for a specified time so it is recommended to follow it with WAIT so that the ball has time to eject fully.

This function stops the boulder intake motor. No argument is required.

This function automatically aligns the robot using the camera.

The Log Path.vi is used in getting a file reference that is later used in the Datalogging.vi. This .vi gets a timestamp of the time a match started in the form of a date string and a time string. These strings are then concatenated with an underscore between them. Then, all of the characters that are not compatible with file names are replaced with periods or underscores. After this this timestamp string is concatenated with the reference to a folder named Logs and “.txt” is added on the end. Then this is converted from a string into a file reference, which is created using the Open/Replace/Create File.

The IMUtoNormalGyro.vi is used to convert the IMU data to that of a normal gyro. The IMU goes on a scale of -180 to 180, so if pitch, roll, and yaw are less than 0 180 will be added to them. This makes sure that the values will be on a scale of 0-360 so that they can be used as ordinary gyro values.

In Tele-Op the driver can also use our straight line drive function. This can be used to keep the robot moving in a straight line even if it is crossing over an obstacle or is being hit by other robots. It moves at a constant speed forwards or backwards whenever a one of the POV buttons is pressed and uses a PID to adjust the direction that it moves based on the gyro.

The Drive Talons Coast.vi controls the drive motors. It sets the motors to use the encoders on the robot. We can use this to have the robot compensate for any drift while driving and still drive in a straight line. We also set them to Override to Coast mode, which allows the motors to ramp down instead of immediately stopping the robot as soon as there are no joystick values present. Another thing we do is set the PID on the controller as well as the ramp rate.We also set the joystick motor values to Speed and Percent VBus. The default values is Speed, but this does not allow the driver to get unstuck on a low battery. When the driver presses the override button on the controller the mode will be changed to Percent VBus to allow this to happen. There is also a similar .vi known as the Drive Talons.vi which sets the mode to Override to Brake instead of Override to Coast.

The CSV file checker checks the commands and arguments in a csv file to verify that they are valid. This helps to eliminate simple mistakes in the script that can make the robot not work as intended.

The Gyroscope simulator is used to help visualize where the robot will be at any point in the script relative to where it started. This helps drivers and see the absolute position of the robot accounting for gyroscope resets.